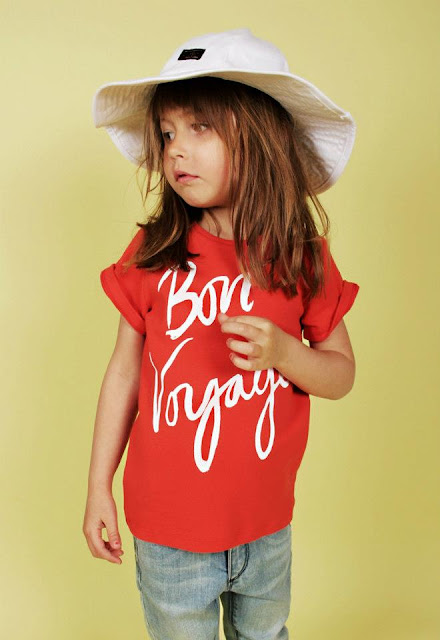 For the Spring/Summer 13 Collection Bon Voyage, Mini Rodini finds inspiration from Love Boat and Captain Cousteau. From the Mediterranean to the Caribbeans, this collection is an odyssey across the world’s greatest oceans.

It includes clothes for any occasion: light woven shirts, shorts and blouses, super cute sneakers and white denim. Among the new range of products are protective uv-suits and stylish sunshades for lazy days in the sun.

Sustainability, quality and quirky design in the true spirit of Mini Rodini. The new collection is sophisticated yet stylish filled with organic terry and jerseys, maritime chic swimwear and prints in shades of blue, lemonade yellow, sunset orange and flamingo pink.
This is the complete wardrobe perfect for any little member of the Mini Rodini Society. 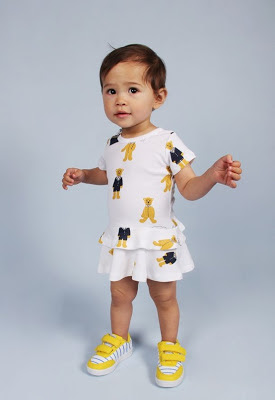 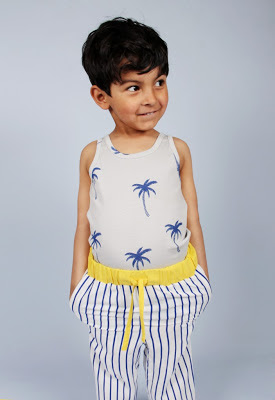 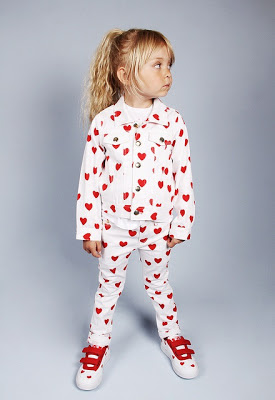 Happy Valentine Day to you all! ♥

One of our favorites! Mini Rodini (by Orange Mayonnaise !!)

This year the fashion trade fairs for children in Copenhagen were combined at CIFF Kids after rival fair CPH Kids announced earlier this year that they would not be holding their show this season.

CPH tended to have the more trend-led and smaller exhibitors, some of whom have moved over to CIFF Kids which was definitely to the fair's advantage. As well as the very cool New Generals who held their catwalk show there, also Petit by Sofie Schoor and Noa Noa showed on the catwalk which, with the CIFF trend catwalk show, livened up the atmosphere a lot.

The leading trend labels were also grouped together, which helped buyers wanting to focus on the smaller labels as CIFF, which was always the more commercial of the two fairs, also has some huge stands for local Scandinavian brands such as Hummel, Aya Naya and Name it, as well as Dutch brands such as Tumble'n Dry and Gsus industries. Many of the brands had also exhibited at Playtime Paris, such as Soft Gallery, New Generals and Sprout by Gro.

The Scandi look is a divided one, with newer brands, such as Soft Gallery, taking a path using greys, rust and soft fleshy shades of pink which have been very directional, to the point where the window display at the famous Copenhagen Illums Department store featured an interiors scene set up with exactly their signature colours. Pale Cloud, who have a similar palette, exhibited on the Friday in one of the rooms available at the Bella Sky hotel nearby.

Another theme focuses on small itsy Liberty prints and gentle metallic touches, such as the styles of Noa Noa and Christina Rohde, through to a far brighter and more graphic print aesthetic which is the Scandinvian classic style of old, by such companies as the eco-friendly Fred's World by Green Cotton and H.J.O.R.T.H  Copenhagen.

When you start to look though, you see the soft pink tones permeating everywhere, made all the more noticeable as it is an unusual colour for the winter season. There is also a move towards quilted cotton and cotton fleece – possibly an economic answer for a lower price point.

Labels of note were of course Soft Gallery, New Generals who had a fantastic show, Sprout by Gro, Mads Norgaard, How To Kiss A Frog, Petitbo, Christina Rohde, FUB, I Dig Denim, and Mini Numph. With over 300 brands exhibiting, there were too many to mention, but it is fair to say CIFF Kids has made a good transition to accomodate the new arrivals and business seemed very brisk.

Doutzen in Mini Rodini dress by Orange Mayonnaise !!
See for this dress > http://www.orangemayonnaise.com/webshop/mini-rodini-rope-dress/ws-pr/pr676#.URquz6VS7_s