Written by Les Enfants a Paris

Yes, Paris is an amazing city for a stroll, but some streets simply stand out more than the others. From charming walkways to extravagant roads…
Today we feature Rue des Barres, a cobblestone pedestrian street next to the church of Saint Gervais, on the Rive Droite in the Marais area. It is well-hidden, but quite pretty and peaceful, and fairly well insulated from traffic noise.
Warm afternoons bring clued-in locals to the terrace seating of tearoom L’Ebouillante for fresh salads, while at the base of the street sit the popular Chez Julien restaurant and Café Louis Philippe, where Johnny Depp once filmed a scene for The Ninth Gate.
It isn‘t a very long street, but it‘s pleasant and safe for children to play as you can see.
Get inspired.
[All photo’s taken by Emily Kornya for Les enfants a Paris]

Melodie wears a shirt by Marie & Rose-Alice, dress by Play is Work, socks by Collegien and sandals by Salt-Water Sandals.

Kenan wears a shirt by Boboli, trousers by Play is Work and shoes by Diesel Kids
Megane is wearing a salopette by Emile et Ida, top by Little Emperor, socks by Collegien and shoes by Agatha Ruiz de la Prada.
Alexander is wearing a T-shirt by Ma Locomotion, shorts by Stella McCartney via Orange Mayonnaise and sandels by Salt-Water Sandals.
Madyson wears a top by Raspberry Plum and trousers by Gabriel et Valentin.

Sharon is wearing a top by Raspberry Plum and skirt by Marie et Rose-Alice.

Alizée wears a shirt by Mini Rodini via Orange Mayonnaise, dress by Play is Work, shoes by Rainbow & Snow.

Sharon is wearing a top by Raspberry Plum and skirt by Marie et Rose-Alice.

Charlotte wears a jacket/short by ELSY, skirt by Gabriel et Valentin.
Alexander is wearing a T-shirt by Ma Locomotion, shorts by Stella McCartney via Orange Mayonnaise and sandels by Salt-Water Sandals.

Malone wears a shirt by Marie & Rose-Alice and salopette by Le Carrousel.
Lea is wearing a dress by Stella Cove and socks by Collegien.
Madyson wears a top by Raspberry Plum and trousers by Gabriel et Valentin.

Madyson and Lilou are both wearing Raspberry Plum.

Megane is wearing a salopette by Emile et Ida, top by Little Emperor.

Photography by Emily Kornya, children’s fashion photographer who works throughout Europe. She has recently moved back to Europe after completed her undergraduate degree in English Literature, Russian Literature in translation and South Slavic Studies at The University of Toronto.
Represented by Quai des Blondes in Paris.
www.emilykornya.com
----- 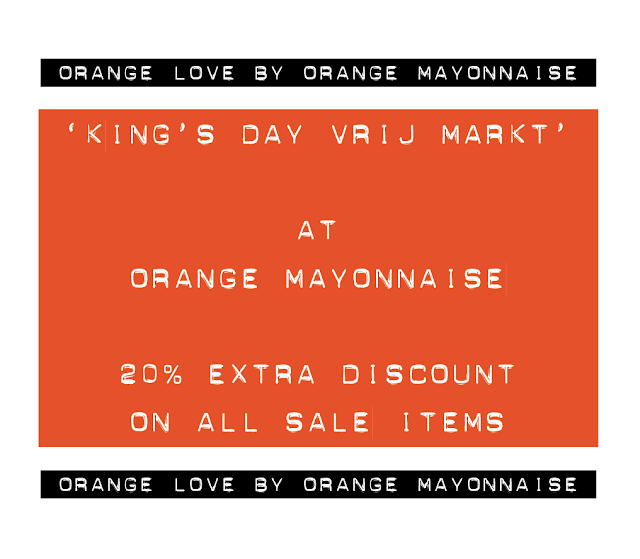 TODAY IT IS KING'S DAY IN THE NETHERLANDS....
and as the weather is to poor to go outside, we decided to start our own 'vrij markt'...

Therefor we offer you an extra 20% discount / off on all our SALE items...
use code : ORANGEKING20

at the check out of the online Orange Mayonnaise shop !
Valid until april 28th (23:59 h / NL time)
(valid on new booked orders only)